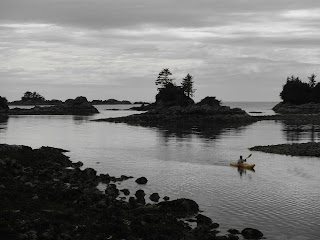 We woke up in Toquart Bay's Secret Campground to the sound of rain drops pattering on the tent. It was an easy decision to roll over and go back to sleep until the storm passed. From what we'd heard, weather on the west coast of Vancouver Island, BC was notoriously warm and sunny during the month of August so we were optimistic. My husband Drew and I were setup to launch on a 3-day sea kayaking loop through some of the 100+ islands that make up the Broken Group in Pacific Rim National Park Reserve. After a couple hours it started to rain even harder and we knew it was time to get moving if we were going to get on the water. Outside the tent dense clouds sat heavy on the mountains but the fog was lifting to give great visibility of our first landmark, the Stopper Islands. That was enough motivation to pack up the wet tent, load our kayaks with dry bags, and launch into the solitude of Barkley Sound.


We headed through the passage between Stopper Islands and Drew mentioned he had always wanted to see a whale in the wild. Our guidebook mentioned there were 75-100 resident gray whales that live off the west coast of Van Island year round. We put whale watching at the top of our activity list but the rain continued to pick up. My hood was cinched so tight around my face it was hard to see anything except Drew's bright kayak in front of me. After a couple hours of paddling through the torrential downpour we made a lunch stop at Hand Island and had given up our expectation that the storm would lift. We huddled in the dripping trees dreaming of camp, dry layers and hot chocolate. After a couple more hours of paddling we made it to the beach camp of Gibraltar Island. We found a sheltered spot in the cedars and set up a tarp and tent to hunker down for the afternoon. The rain continued to hammer down and by evening a waterfall had formed next to camp.

The next morning it was a relief to wake up to the sound of gulls instead of rain drops. We rolled out of our sleeping bags to find blue sky and we happily hung our gear to steam in the sunshine. A bald eagle perched in a tree overlooking camp as we loaded up and shoved off into the glassy water. It seemed the weather had deterred the summer crowds, the air was fresh from the rain, and things were starting to look bright. 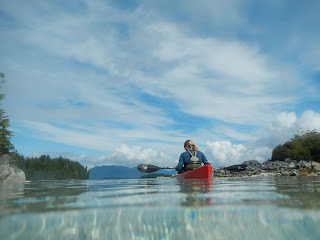 We spent the morning winding our way through the Tiny Group and spotting sea stars and jellyfish in the clear blue water. While lounging on a white shell beach at lunch we finally got to experience the picture perfect Broken Group as it appeared in the photos that had drawn us in. 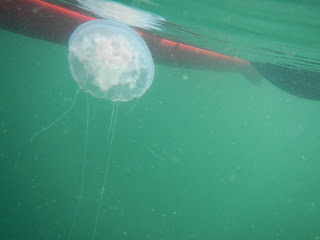 By early afternoon and a couple seal colonies later we made it out to Benson Island on the edge of the Broken Group. We scouted the open water for signs of whale spouts but didn't have any luck. Our priorities soon switched to setting up camp on the point of Clark Island and an afternoon of tanning, hiking and tide pools. We had the island to ourselves so we turned up the music while we set up a beach burrito bar and sat around a driftwood fire as the sun went down. 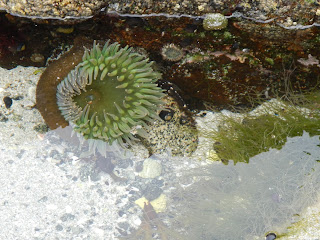 The next morning we scanned the ocean again hoping for a whale sighting but finally gave up hope. We packed our gear and started the four hour paddle back to the launch site. About halfway I suddenly saw a geyser shoot straight out of the water in the distance near Dodd Island. Out the corner of my eye I was sure I'd just seen a whale! Unfortunately, all that was left to point out to Drew was a cloud of mist hanging over the water. Fingers crossed, we hovered for a few minutes hoping for another sighting. Sure enough, directly ahead we saw a gray whale surface and shoot out another spout of water before it disappeared from view for good. That's all it took for us to fall in love with sea kayaking and we were so excited the rest of the way back. From the launch site we headed to the Tofino waterfront to start planning our next sea kayaking adventure over a fresh seafood dinner.

For anyone wanting to experience a paddling trip to the Broken Group, this map and guidebook have good information on everything from camping permits to currents and tides:

In general, the inner islands are a calm place to paddle in the summer and the conditions get rougher near the outer islands of the group. It's a great place to go if you already are, or think you might want to get hooked on sea kayaking. 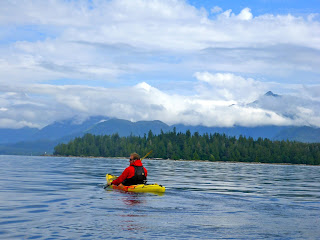