Party in the USA

With my California addiction kicking into high gear, I decided it was time for another road trip. It didn't take much more than mention of double run days and the Coloma Club to convince Melissa DeCarlo to join me. 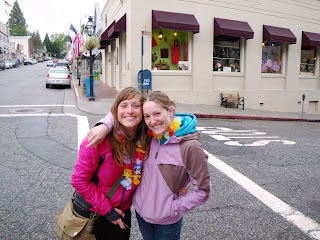 After a quick detour to Gold Country Casino in Oroville to meet up with some friends, we rolled into Camp Lotus just in time to pass out in the parking lot for a few hours.
We met up with the Montana crew in the morning, making a plan to head to Canyon Creek. After spending some time figuring out exactly which Canyon Creek it was, we headed out to catch the one release of the year. This group turned out to be even more directionally challenged than the Christie and I. We lost our way several times, one of which took us on a Class VI shuttle in which we lost the boats off the car, but just once. There was nothing but smiles and giggles however, as we were jamming to "Party in the USA" the entire drive (with the exception of the brief history of Coloma lesson we received from Mr. Matt Parker). 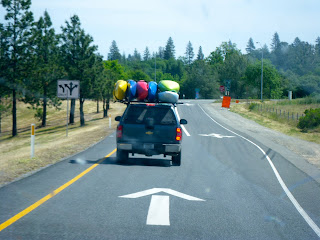 Wait, did we take a wrong turn?? 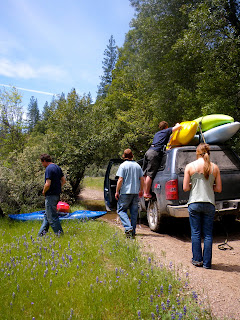 Oops! Lost the boats!
We finally made it to the put in only to take the wrong trail to the river, missing some of the best rapids. Doh! After a very quick, fun run we all decided that we would need to return the next day for redemption. Here is a short video of rockstar Katie Scott and the adventures we had over the two days on Canyon Creek. Yes, we saw Lance....and got free shirts! (consolation for having to pull over for an hour on the way to the river)
After a really fun run down the South Yuba 49 to Bridgeport the next day, it was time to start thinking about heading home. Boo. Melissa and I decided that we would hit up Pauley Creek before the push North and were excited to have fellow Oregonian Jesse Coombs join us as well. We had a blast on Pauley Creek, be-bopping down some really fun waterfalls and class IV rapids! 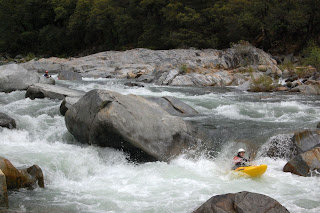 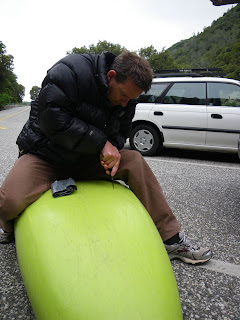 My boat NOT enjoying the Cali love!
Nothing like boat repairs at the put-in! 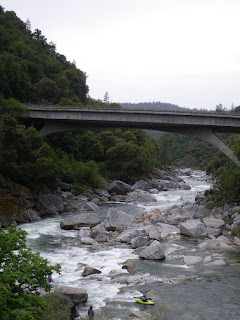 Getting started on South Yuba 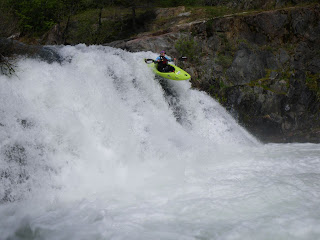 Kate trying to straighten it out on the last drop of Pauley Creek
Once again feeling sad to be leaving California, it was time to go. Now it's time to think about Idaho, but there is no doubt in my mind that I will soon return.
Posted by Kate Wagner at 10:36 PM No comments:

East Fork of the Kaweah
We woke up at the Three Rivers Hideaway surrounded by our friends ready to fire up the East Fork of the Kaweah. We had been planning on doing the Hospital Rock section, but didn't really want to put on with just the two of us after we found out that it was a pretty juicy flow. After quite a bit of discussion, we decided to hike in and join the boys for the last couple miles of the run. With the boys all talking about this being the highest level they have put on the run, we figured this was a good bet as it would give us an opportunity to get a little taste without being totally committed to the whole run. 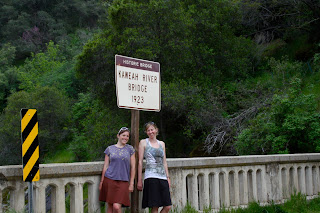 We got directions and started off down the road, only to find out the neither of us knew the name of the road we needed to turn on. Christie was convinced it was Mineral Rd. and I was certain it was King Rd. So, like any stubborn drivers, we decided to wing it. We both broke out into laughter when we pulled up on a sign for Mineral King Area. 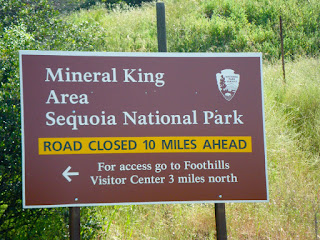 We make a good team
Feeling a little nervous about hiking in on private property, we quickly got dressed and headed down the road. 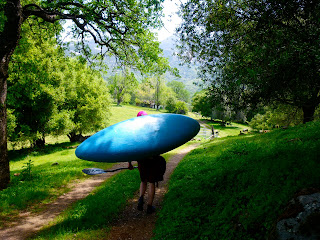 Christie cruising to the put in
Following a quick hike and the use of our ninja skills to dodge the Poison Oak, we made it to the river. Spotting a nice sunny slab of rock to chill on, we hopped in our boats and ran a quick drop. 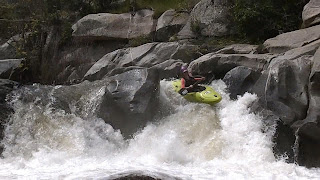 Kate on the entrance drop
This is the only picture we got on the river, as once the boys showed up we were moving!
We were soaking up the sun when the boys came around the corner, a couple of them excited to see us with the belief that it would let up a little for them. That comment was greeted with a giggle and a "Oh, we saved some stuff for the girls!" Oh boy, what did we get ourselves into?
The river was awesome, filled with big slides and fun boulder gardens! This is also where the simultaneous beatdowns happened. It went a little something like this:
We came around a corner to see the last of the folks in front of us, with the exception of Drew, going over a horizon line....
Christie: "What's the line?"
Drew: "Well, you kinda want to go left. There are two knob things, you want to go
between them." (Christie then disappears.) "Yeah, that looked good, go where she went."
As I paddle over the edge, all I can see is a baby blue boat getting worked in the big hole at the bottom. Oh no, I'm gonna hit her! I'm pretty sure I just froze at that point, certain that I was going to take her head off with my boat, then CRASH!! There was an explosion and I was suddenly on my stern, paddle flying, and before I knew it I was taking a little dip. I was relieved to look over and see Christie in the water with me, head still intact. Luckily she was out by the time I crashed into her boat. We really know how to put on a show!! We all had a good giggle, got situated, and continued downstream.
Christie and I were so excited about the run that once we ran shuttle we decided to drive upstream and check out some of the stuff we missed. Holy steep! We giggled as we reviewed the day and felt good about our decision to only do the last couple miles. 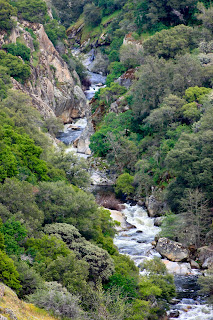 Some of the goods upstream 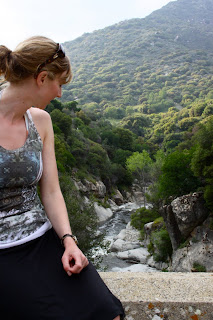 Christie checking out the put in from the bridge
We agreed that this was the highlight of our trip and that we couldn't wait to get back to the mighty Kaweahs!
Posted by Kate Wagner at 5:00 PM No comments: